December 12 – 15, 2013. More than a foot of snow falls on Jerusalem over 2 days. It’s the worst December snow storm in Jerusalem since weather conditions began being recorded more than 100 years ago. Trees were down, electricity and telephone lines were knocked out, roads were blocked – all over Jerusalem. Residents were without electricity and telephone service for days. In a region where one snowstorm is considered unusual (Before the snowstorm in January 2013, the previous last snowstorm to hit Jerusalem was in 2008.), a storm of this magnitude had the potential of being devastating and disastrous, especially for the Palestinian residents of East Jerusalem, where physical infrastructures lag far behind other areas of Jerusalem and Israel.

We are proud to have 2 programs – MiniActive and Emergency Response Networks – that took leading rolls in helping the Palestinian residents of East Jerusalem weather the storm, again. It can even be said that in the chaos that the storm brought, the networks we cultivated (MiniActive and Emergency Response Networks, see below) were the only ones that actually functioned. Not only did they function, they joined together to help residents weather the storm. 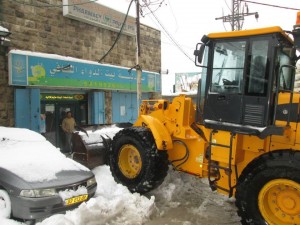 MiniActive set up virtual and real ‘situation rooms’ that coordinated the onslaught of reports and problems from the field, via its hundreds of volunteers throughout East Jerusalem. Those in the situation rooms were in constant contact with the appropriate service providers – from the electric, telephone and gas companies, with the Emergency Response Networks to try and clear roads and deliver vital goods to stranded families, to the municipality, reporting fallen trees – to report damages and find solutions to these and other urgent problems. Updates were uploaded to the MiniActive Facebook page. 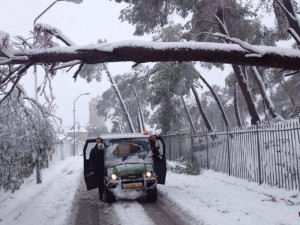 The Emergency Response Networks that had been organized in a number of Palestinian neighborhoods and villages in and around Jerusalem were as ready as they could be. The populations of these areas had already been mapped (to know where all the doctors, nurses, social workers, contractors, owners of tractors and 4X4 vehicles were, etc. See here for more information). Practice drills had already taken place. So when the snow began to fall, the Networks knew what to do. They worked throughout East Jerusalem, from Jebel Mukaber and Sur Baher in the south to Silwan, and Sheikh Jarrach to Beit Hanina and Shuafat in the north, and even extended beyond the security fence to Kufr Aqeb. They succeeded in recruiting all the local 4×4 vehicles, tractors and other heavy machinery to clear away snow and provide aid to individuals in need. They cleared snow and alerted others to hazards. They helped go door to door to deliver emergency assistance to those in need. 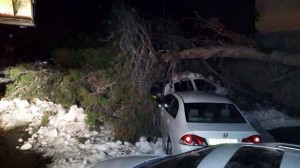 Besides the immediate emergency relief, both programs cultivated communication between residents, and between residents and service providers. Residents gained confidence in their ability to take care of themselves. The end result – community solidarity toward improving their everyday future, together.