In 2004, we at the JICC started having internal discussions about activism. Since one of our main missions is to help residents, from all identities, to impact the city and their communities, activism seemed to be an important term and approach. However, over the years we have noticed that too much of the activist energy is non-effective. People initiate demonstrations and events to promote a cause, but nothing in these events produces any step to advance this cause. People make YouTube movies about a cause, “share” and “like” relevant articles on Facebook, and even spend an entire summer in tents as a “protest,” with few significant outcomes. We then had to stop and ask ourselves – when is activism effective? Or cost-effective?

Our continued internal discussions yielded a number of insights into what makes activism effective. Based on these, we formulated significant tips and guidelines, including:

We spoke about these insights and tips at a number of forums. We used specific examples, logic, humor. The talks were excellent and people agreed with our approach very much. They left the room and…. continued to do ineffective activism. We then understood that our talks on effective activism were not effective at all.

So we invented a workshop called “MiniActive”. The idea was to let people train themselves to change the world by choosing a very small world to change. In the 4-5 meetings of this workshop, each of the 4-5 members chooses something that he or she has a desire to change, that – 1. can be accomplished (if all goes well) in about a month; and 2. cannot be done alone (requires convincing neighbors, government, etc. to do something). Examples can be: repairing a street light, improving garbage collection in a specific location, fixing a pothole, replacing a safety fence, initiating an event in school, connecting neighbors to meet together, etc.

This hands-on approach worked! The quick feedback allowed people to find what works for them as activists. We started doing these workshops around the city.

Very quickly, we found ourselves in “MiniActive 2.0”, in which three important concepts were added:

Designed to be implemented with all Jerusalem’s populations, MiniActive is most established in Jerusalem’s Palestinian-Arab sector. Begun in May 2012, MiniActive quickly grew to a network of 1,000 female volunteers, from every corner of the city. The MiniActive Facebook page has over 32,000 ‘likes,’ many of them from East Jerusalem. Thus far, they have solved tens of thousands of problems and improved everyday lives of tens of thousands of residents via continual communication with service hotlines (telephone, electricity, water, municipality, etc.), fixing street lamps and potholes, replacing traffic signs that had been damaged, improving bus stops, ensuring garbage was picked up and garbage were receptacles in place, re-paving bad roads, repairing electricity and telephone problems, and more.

Professional and Civic Development for the Environment

Since its overall goal is to improve residents’ immediate environment, in 2014 it began to offer courses and workshops that focused on a broader definition of improving one’s environment, such as composting, recycling, photography, etc.

Since 2014 the project has also included monthly professional development seminars for the volunteer regional cluster coordinators from the East Jerusalem neighborhoods. In addition to peer learning and assistance on a case-by-case basis, coordinators also discuss mapping local needs and setting priorities; navigating the Municipality and its different departments; navigating other service providing agencies (phone, electric, water, etc.); writing letters to these agencies; dealing with the Municipality’s contractors in the field, who might not be motivated to perform the tasks given them – especially if a woman is supervising- and more. 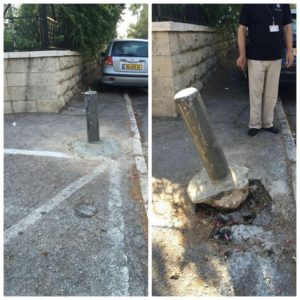 As an outgrowth of this work with the cluster coordinators, the program began offering Hebrew classes. Since 2014, hundreds of women have studied Hebrew each year. Feedback after these courses has demonstrated their importance – the women report they gained confidence to communicate – with officials in the Municipality and other agencies, with people on the streets. They are no longer afraid of what people are saying in Hebrew, because they understand them.

These workshops and courses have influenced what the women are demanding on the ground in East Jerusalem. Whereas in the beginning the main requests were to fill a pothole, now there are requests to pave entire roads, which are being carried out. Whereas initial requests were to fix one sign, now requests are to replace bus stops in entire neighborhoods, which has also been carried out. In the beginning the requests were to collect garbage in one particular location. Since the fall of 2015, a major Facebook campaign, “We won’t live in filth!” has led to the addition of millions of shekels to the Municipality’s annual sanitation budget for East Jerusalem. It has also led to plans from the Israeli government to invest tens of millions of shekels into sanitation and infrastructure in East Jerusalem, and has inspired activism throughout the city to make Jerusalem a clean city.

The natural development of the program has led to a unique working relationship between the Municipality and the residents that crosses (or uniquely puts aside) the political situation in Jerusalem. When the project started, the Municipality wasn’t able to work effectively in East Jerusalem. The Municipality claimed that no one requested repairs (understandably, since most of the process was not accessible in Arabic), and others claimed that the residents would destroy the repairs as soon as they were done. MiniActive proved them wrong. Once processes were made accessible in Arabic, requests for repairs poured in. And of course, repairs remained in place. Over the years, MiniActive has been able to open lines of communication between Arab residents of East Jerusalem and service-providing agencies in order to reach amazing on-the-ground results. 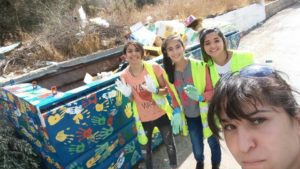 In early 2015, the JICC expanded the program even further to include teenage girls, and in 2018 to teenage boys, creating MiniActive Youth. In weekly meetings the teens learn leadership skills and practices; they learn about the environment and environment-saving practices such as recycling, composting, and more; they choose projects that help to improve their local environments, such as painting walls in/on/near school grounds, garbage receptacles, phone and electrical cabinets, and more.

MiniActive as a Tool for Community Development 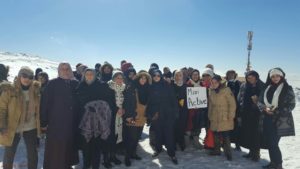 As if in a winter wonderland

MiniActive has been rewarding its volunteers for their dedicated service with trips throughout Israel and Jerusalem since 2013. They have developed a wide range of activities that not only build community but also answer real needs in the Palestinian community in East Jerusalem: 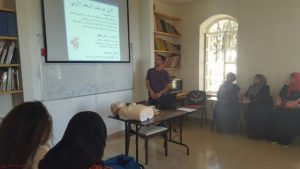 As you can see, MiniActive in East Jerusalem has been a ground-breaker in many areas, serving as an example to other areas of Jerusalem, other parts of Israel and even internationally.

You can read more about this network in the JICC blog, the relevant category, on the East Jerusalem MiniActive Facebook page, as well as on MiniActive’s web site.