The Writing is (not) on the Wall

It’s not nice to wake up during the Passover holiday to ugly graffiti: 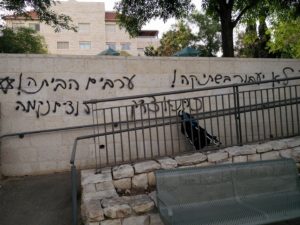 Hate graffiti on the Railway Park in southern Jerusalem

Especially if it’s racist graffiti that says, ““Arabs, go home,” and “We want revenge.” It also had “Kahane was right,” Rabbi Meir Kahane, the founder of the outlawed Kach movement that called to expel Arabs from Israel and the Palestinian territories, who was assassinated in Manhattan in 2012.

Fortunately, a group of activists, part of our network of activists for tolerance that include residents, city council members and the Municipality, were quick to act. They called the Municipal hotline, and within a few hours the graffiti was cleaned. 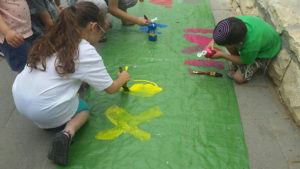 Working hard to blot out racism

But they didn’t stop there. They replaced the graffiti with other signs, full of love and acceptance. 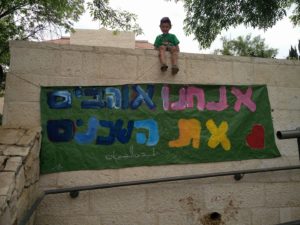 We love our neighbors, in Hebrew

Here’s an independent post of what happened. The incident was even reported in both the English and Hebrew YNET web sites, which are associated with the most widely read national daily newspaper, Yediot Acharonot.

We were doubly interested in this process, since we’ve been helping residents and activists along the Railway Park initiate community-building activities along the park almost since its opening. Coupled with this cooperative work to promote tolerance, we’re pretty proud of this network of activists, which acted quickly, independently, and effectively, with our support and encouragement. 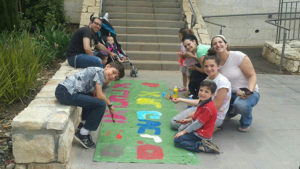 Even Yael Freidson, the Ynet reporter who first reported the racist graffiti, tweeted, when she saw the final result, with a hashtag that says “these are things that make me happy”. Indeed, the tolerance activists of Jerusalem managed to make lemonade out of lemons. They demonstrated that Jerusalem has an efficient and sustainable network of tolerance!

Of course, the incident was posted on our Jerusalem Tolerance Facebook page:

Many thanks to the UJA-Federation of New York for its support of our efforts both with residents along the Railway Park and to promote tolerance throughout Jerusalem. Many thanks also go to the Jerusalem Foundation for their support of our work.

Lechayim! From the Future Site of Barrakevet Cooperative Community Cafe

Let’s raise a virtual lechayim, to the future permanent location of Barrakevet, a volunteer-led Cooperative Community Café, that will be located along the Railway Park. 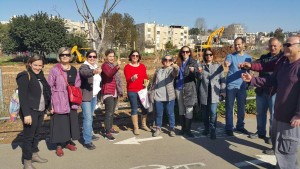 Barrakevet is one of the initiatives that we’ve been mentoring as part of our Deliberative Democracy work with activists from the Katamon-Baka’a – Katamonim area along the Jerusalem Railway Park (See here and here for more), thanks to support from the UJA-Federation of New York. Thus far, they’ve set up shop out in the open, sometimes next to the bus-stop-cum-library called the Reading Station, sometimes other places, but always requiring good weather to operate.

Their ultimate goal is to obtain an old train car as a permanent home. One of the first steps in this process is finding a suitable location for this car, which was the goal of initiators’ recent tour together with municipal officials along the Park. Final locations are still being discussed, but it’s important that the dialogue continues.  They’re also discussing different models and partnerships for operation. Next step will be to get that car… 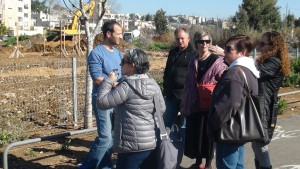 Below is a short movie that was made of the tour (in Hebrew) .

May we soon be toasting lechayim from the Barrakevet cafe!

Toward a Cooperative Community Café on the Jerusalem Railway Park

How do you want to see your green open spaces? That was the question we raised when we first began working with residents from neighborhoods that line the Jerusalem Railway Park about eight months ago, at the beginning of March, thanks to the support of the UJA-Federation of New York. Using Open Space Technology, a number of initiatives were raised, which we continue to follow up on today.

One of the initiatives that has gained momentum has been a Cooperative Community Café . A Community Café would be planned and operated by residents, for residents, and residents will make all the decisions – regarding what kind of food / drink will be served and at what prices, when it will operate, and what kind of activities will take place there. The goal of the Community Café is to create an informal meeting point for residents in a pleasant and casual atmosphere. All proceeds from the sale of food and drink will be dedicated to the operation and development of the Café, and not for profits.

On September 28 we held a meeting for the leading team that seeks to establish the Community Café in the Jerusalem Railway Park. The goal was to review a number of different models from around Jerusalem and other cities in Israel, and determine what is best of the Railway Park. Below is the comparison of the different characteristics of the various models. 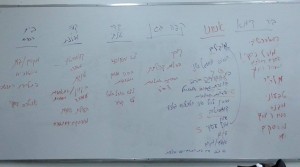 We distributed a number of tasks among team members before the next meeting, including finding an appropriate name. Any suggestions?

‘The Railway Park Is in Our Hands’ – Continued

We reported before about the exciting developments that we’re leading, thanks to the support of the UJA-Federation of New York, together with the Community Councils of Greater Baka’a, Gonenim and Ginot Ha’Ir. Now, almost three months later, we held a follow-up meeting, to see what progress has been made on the various projects that were discussed. 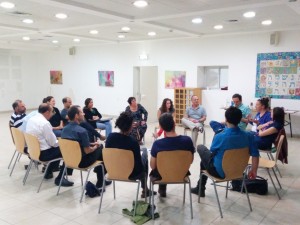 This time there were about 20 participants, all those and more who committed to advance different projects on the Railway Park that runs from the First Station near Liberty Bell Park to Teddy Stadium. Participants discussed projects such as:

Other ideas that were raised include:

“What was noticeable was the creativity that rose out of a group of very different people, who all love the park,” said our own Na’ama Afek-Barzilay. “There were people there who had not been able to come to the first meeting. There were people there who told that they had moved into the area because of the park. The important take-away from this is that the future of these initiatives in the park really are in the hands of residents. The community professionals will lend their assistance, but their success is based on the residents.”

Social Entrepreneurship on the Jerusalem Railway Park: Deliberative Democracy at its Best

How do you want to see your neighborhood, your city? And what can you do to get there? Often, in our everyday routines, especially after watching / reading / listening to the news, it is difficult to see how we can have an influence. The JICC’s Deliberative Democracy program seeks to change that.

Over the past few years, with assistance from the UJA-Federation of New York, we’ve been working intensively with a number of community councils to help residents influence and improve – and take responsibility for and ownership of – their neighborhoods, and their city.

As a result of our successful work in individual communities, we were asked to lead a larger process led by three community councils in the southern part of the city – Ginot Ha’ir, Baka’a, and Gonenim. The mission – enabling residents in neighborhoods that include the new Jerusalem Railway Park to fully enjoy and take ownership of this new pearl on the Jerusalem landscape. Here’s the flyer that was posted all over the Internet and social media: 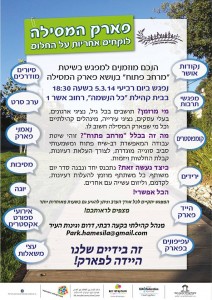 The story of the Railway Park itself is one of social activism (more about it here and here). The park runs along the section of the old Ottoman-era Jaffa-Jerusalem rail line, and includes the neighborhoods of German Colony, Baka’a, the Talpiot Industrial Zone, Katamonim and Beit Safafa, ending at Malcha’s Teddy Stadium and the new train station that is in use today. After being cancelled in 1998 the tracks fell into disrepair, and had become an eyesore and garbage dump. Several years ago a group of environmentally-conscious residents, community activists and architects, successfully lobbied to turn this area into a massive urban park instead. After intense lobbying, this plan was accepted by local and national planning authorities. After several years of construction and support by the Jerusalem Municipality, the entire length of the park is just being completed.

With such deep roots in the community, it is only natural that the next step, injecting community activities and responsibility, along the course of the park, would involve the community as well. On March 5, we held a town meeting for residents from all communities that border the Jerusalem Railway Park. In all there were some 50 people, coming from the northern to the southern tips of the Park. All came to discuss events, initiatives and characteristics that they wish to see in the Park. 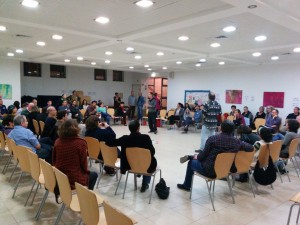 We used Open Space Technology for this event, which enables participants to raise and choose the issues they are passionate about, and work to advance them. Residents broke up into a number of groups. They ranged from a music festival, to a Purim parade, to growing edible plants along the Park, to Jewish-Arab relations to security and cleanliness. All groups are now forming plans of action of the different initiatives in order to bring them to fruition. The evening was so successful that we got this thank you from the different Community Councils: 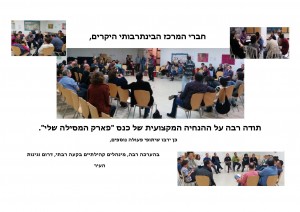