Opened in the fall of 2003, the Center for Arabic Instruction aims to bridge the language chasm between the two peoples through Arabic language instruction and resource center for change agents citywide. The group language instruction takes place in 10-month courses that are designed to reach a level that allows continuing language, as well as to provide tools to expand knowledge after the completion of the course. Weekly, 3-hour sessions focus on Arabic for communication, with the explicit goal of enabling students to be able to communicate with others on the street and in everyday life. Students receive books and accompanying disks, and classes include a large component of discussions and listening to songs and other verbal material to practice. Students also enjoy activities outside the classroom, such as guided tours through the alleyways of the Old City, lectures by Arab authors, poets and social activists, and meetings at participants’ homes. 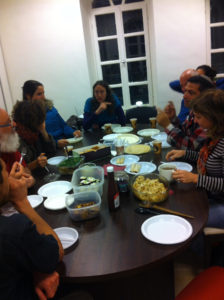 How do you say ‘sushi’ in Arabic?

Enrollment has reached 250 students each year, over 5 levels. Students are generally professionals and volunteers who work with Arabic-speakers on a regular basis, whose knowledge of Arabic will make a large impact in advancing relations between Jews and Arabs in the city.

Participants report that the courses enable them understand Arabic and Arab culture in a number of ways,  helping them professionally. One is now able to understand full presentations in Arabic in only his second year of study; a second partnered with a third, who worked with a Jewish-Arab organization that works in archaeology, which led to a joint project; a fourth enjoys not only the language – “it’s so much more than the language, it’s the culture, the traditions.”

You can read more about this program on our relevant blog category.