Mt. Zion is a fascinating place. It is home to a highly diverse array of people and institutions, as diverse as Jerusalem itself. These range from the Dormition Abbey, the Diaspora Yeshiva, Protestant, Catholic, Jewish and Muslim cemeteries, Oskar Schindler’s grave (in the Catholic cemetery), as well as the home of renowned Israeli sculptor, David Palombo, who created the gates to Israel’s Knesseth building. The most important of these sites is David’s Tomb, and the room of the last supper, situated one on top of the other, the only site in the world that is holy to Judaism, Christianity and Islam. Christians call the room on top of David’s Tomb the Cenacle, better known as Jesus’ Last Supper Room. It is regarded as the second important site for Christians in Jerusalem (after the Church of the Holy Sepulchre) and boasts 2 million pilgrims every year. For Jews it is the tomb of King David which is also the Prophet David (Nebi Daud) for Muslims, and hundreds of thousands of Jews and Muslims come to the site every year.

The history of this holy site, and the history of Mount Zion, has been very complicated over the last 1000 years, creating a great deal of local and international and inter-religious conflicts. Much tension has also arisen in the last few years over who visits what, and when, and to whom it all belongs. Seemingly a microcosm for all issues Jerusalem…. 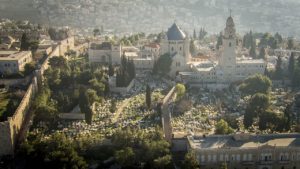 The Jerusalem Intercultural Center moved to its beautiful location on Mount Zion in 2006. We remember that when we began to speak with our neighbors, we were shocked by the level of hostility among the organizations and people on this site. We once said that creating peace on Mount Zion might be equivalent to achieving world peace.

These tensions were brought to the fore in 2014, surrounding the visit of the newly-appointed Pope Francis to the Room of the Last Supper. At that time, the JICC was formative in bringing together representatives from all the different institutions on Mt. Zion, together with the police, to come to a solution that allowed for the visit. However, the Pope’s visit uncovered the deeper problem, and emphasized the need for action.

This process brought about the Window to Mt. Zion program, which began in 2015. The project seeks to decrease conflict among Christian, Jewish, and Muslim religious communities in Jerusalem, of which Mt. Zion is a symbol. Its objectives are to: 1) Enhance collaboration among religious, security, municipal and national government stakeholders to address religious tensions in Jerusalem; 2) Increase coordination to protect holy sites on Mount Zion and of the people visiting them. The project’s main components include: