We’ve taken yet another step in becoming one of the national leaders and reference points of Cultural Competency in the health care system in Israel. On Monday, 23 April we held the first meeting of a professional development seminar cultural competency coordinators from around the country. This is the first such seminar ever to take place in Israel! Our 16 participants included representatives from the major hospitals in the country: Hadassah Medical Center and Sha’are Zedek in Jerusalem; Shiba-Tel Hashomer and Sourasky Medical Center in the Tel Aviv area, Rambam in Haifa, and more.

We have been working to advance cultural competency in the health care system in Israel since 2007, and we are in constant contact with most of the cultural competency coordinators around the country. Most of these coordinators have been appointed since the publication of the Ministry of Health’s Cultural Competency Directive, published in February 2011, that will require medical interpretation services, education and training of medical staffs, environmental adaptations of all health care institutions by 2013. As a first step, the Directive requires health care organizations to appoint a cultural competency coordinator to be responsible for all the processes that work toward equal cultural and linguistic accessibility for all.

Our unique seminar is taking place in cooperation with the Ministry of Health and is a natural continuation of the Directive. The training will provide knowledge and tools to enable cultural competency coordinators to assimilate the Directive in their institutions. It is important to note that most cultural competency coordinators are already in senior management positions in their organizations.

The 5-day training seminar, which will meet weekly until the end of May, will include 50 hours of frontal lectures as well as a webinar with cultural competency coordinators from Canada and the USA. Our funders for this course are the Jerusalem Foundation and the New Israel Fund. The course is being held at the Nursing School at the Tel Aviv Sourasky Medical Center.

The training course will cover:

It will also include guest lectures on the following subjects:

The opening lecture was given by Dr. Emma Averbuch from the Unit of Decreasing Health Inequality at the Division of Health Economics and Insurance Division of the Israeli Ministry of Health. Dr. Averbuch emphasized the importance of the cultural competency coordinator and how he or she can contribute to decreasing inequality in health care. She also surveyed the Ministry’s activities thus far in advancing cultural competency and decreasing inequality in the system. 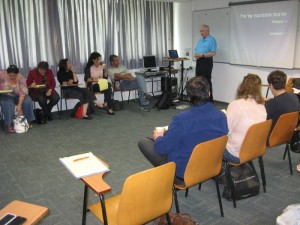 The participants also had the first session covering the “Guide for Cultural Competency Processes in Health Care Organizations”, which is a practical guide we developed over the past 2 years. It details the steps that must be taken to assimilate cultural competency principles in an organization. This meeting concentrated on defining the role of the cultural competency coordinator, as well as first steps in creating a suitable buzz within an organization for cultural competency. In addition, the participants related their experiences with the community, and the discussion that followed focused on the need to establish and expand these relationships to be helpful in times of crisis.

Part of the training included a practical exercise in creating change. Each participant was asked to choose a small initiative that is related to at least one component of cultural competency that he or she wanted to change by the end of the training course at the end of May. This initiative needed to be something easily implementable and with high visibility in the organization. Participants chose projects such as mapping needs and resources, linguistic accessibility of restrooms, and more. 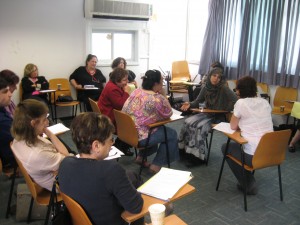 Simulation of a case of cultural competence at the training

Two guest lectures dealt with the relationship between risk management and cultural competency, from Ronen Regev-Kabir, Deputy Director, Public Trust organization, and Netalie Goldfarb, the Care Competency Unit of the Ministry of Health. Our own Dr. Hagai Agmon-Snir closed the day with a workshop on cultural dimensions and the main values of interpersonal communication, to give a taste of the cultural competency workshop that will be the focus of the second workshop on 30 April.

In parallel to this meeting, an Internet discussion group was established that will deal with cultural competency in the health care system in Israel. There will be participants from within and without the health care system and it will enable participants to share knowledge in this area. You can view the discussion group and the course’s accompanying materials here.

Here’s an example of how our work in one area uncovers more and more needs in East Jerusalem, and opens up more opportunities to begin to close the gap in services to Palestinian residents of East Jerusalem.

We spent a long time working toward the opening of a Well-Baby Clinic in Silwan in August 2011. While working on the issue of opening more clinics, we discovered that there was a severe lack of Arabic-speaking nurses who were certified by the Israeli Ministry of Health. It meant that these Well-Baby Clinics in East Jerusalem and other healthcare institutions find it hard to find good certified nurses. The employment authority of the Municipality looked into the matter, and discovered that the problem was much larger – in general there is a dearth of Arabic-speaking medical and paramedical personnel, certified by the Israeli Ministry of Health, in East Jerusalem.

We also discovered that there are hundreds of graduates of Palestinian universities and colleges in the West Bank (for example, Bethlehem University, the American University of Jenin), who cannot work in their fields in the Israeli healthcare system. These institutions are considered ‘overseas’ institutions, and graduates must pass Israeli Ministry of Health certification and competency exams. (Israeli graduates must pass these examinations as well.) Very few Palestinian graduates from East Jerusalem pass these examinations. Paradoxically, the Israeli Ministry of Health is eager for these graduates to find work in the Israeli healthcare system in East Jerusalem, to reduce the above-mentioned lack of Arabic-speaking medical and paramedical professionals. 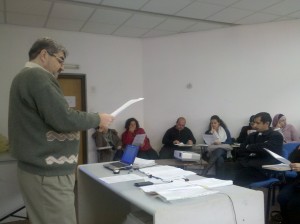 A preparatory meeting for nursing school graduates in East Jerusalem

The Jerusalem Foundation, our long-time partner in creating cultural competence in the city and in creating better opportunities to all in the city, asked us to enter into the picture. Much of the initial work was investigative: we first sought to figure out the real obstacles that prevented Palestinian graduates from passing the examinations, and then proposed responses. At the outset we chose to concentrate first on occupational therapy and nursing. As part of this extended learning process, in November 2011 we held public meetings for each of the professions, which included relevant information about the certification process. Most of the participants had previously failed the exams, and they became integral partners in our learning process of constructing a full picture of the current situation.

The results were fascinating – and yet, typical – of many of the difficult problems that we have encountered, whose sometimes solutions were relatively simple. Indeed, we find many times that what looks as huge barriers can be overcome by simple solutions. Let us share these results and the response we suggested with you:

In occupational therapy, it turns out that until very recently, the exam was available only in Hebrew and in Arabic. Yet, the problem was that the Arabic translation was very poor, which hurt candidates’ chances of passing. More importantly, at Bethlehem University and at the American University in Jenin, the students learn in English! Thus, they would be much more comfortable taking the exam in English. Fortunately (unrelated to our work), in the past year students have been able to take the certification exam in English as well.

But this was only the beginning of the story. We discovered that part of the required material for the exam included position papers in occupational therapy that exist only in Hebrew; knowledge of Israeli laws, which is also available only in Hebrew; and the guidelines for occupational therapy in Israel, which exists in Hebrew, Arabic and English, but that the students knew nothing about! In other words, the Palestinian graduates were sitting for exams, for which they did not have access to or did not even know about significant parts of the material. Many graduates received scores between 50 – 60 (passing is 60), and this is without knowing about a good deal of the required materials.

This information enabled us to respond quickly. We translated the position papers into English (the language preferred by the graduates for the exam); we obtained guidelines for occupational therapy in Israel in English; with assistance from the Hebrew University Hadassah School of Occupational Therapy, we developed a program to prepare graduates for the exam that will take place in June 2012. This program began a week ago with 17 dedicated participants. The course will include 11, 3-hour meetings as well as 2 concentrated days as the exam nears.

Our follow-up is both group and individual – we purchased occupational therapy textbooks that are important for the exam, and participants will be able to use these materials. We helped each and every one of the participants register for the exam with the Israeli Ministry of Health, and more. We are very optimistic, but we will of course be calmer after the results of the June 2012 exams are released…

The situation in the field of nursing was more complicated. Here, too, graduates from East Jerusalem could take the exam in only Hebrew or Arabic, with very poor achievements (1-2 graduates passed the exams each year). The exams themselves are considered difficult – many graduates of Israeli universities also fail the exams each year. After a meeting with the Ministry of Health, it was clarified that from now on it wouldn’t be a problem for East Jerusalem residents to take the exam in English. Thus far we’ve given some 50 nursing school graduates a pre-test, similar to the real examination, to find out what we need to concentrate on in the course. We identified that 20 received between 50 – 60 on the pre-test (60 is the passing grade). This result encouraged us, since the graduates didn’t have much time to study, and if such a large group is so close to passing, the chances of at least 15 passing the certification exams in September after a program of intensive preparation and study, are good. In addition, we learned from the exams on what areas we need to focus more in the preparations.

Based on this information, a preparatory program for Palestinian nursing school graduates is being developed to prepare them for the government exams in September 2012. It is important to note that those who pass the nursing examination in a language other than Hebrew must also pass an additional exam in Hebrew language in order to receive a license to be a nurse in Israel. Yet, the Ministry of Health allows East Jerusalem residents who passed the exam not in Hebrew to work in Palestinian institutions in East Jerusalem. This means that those who pass the exam would only be able to work there. Although there is also a severe lack of personnel in East Jerusalem, we hope to provide participants in this course with Hebrew instruction, so that they will be fully qualified to work in nursing, anywhere in the healthcare system in Jerusalem.

We will be following these women and men through the examination and (hopefully) placement process. We hope that at the end of this process we will not only helped dozens more people receive employment in their chosen professions, we will help more of the 280,000 Palestinian residents of East Jerusalem receive better health care.