We just published an article at the Jerusalem Post and Search for Common Ground (SFCG) News service, focusing on the need for preparing today Jerusalem for potential peace scenarios. Here are the links and the text:

Last month, a Home Front Command exercise was carried out in Israel. The emergency systems were tested for their response to various scenarios in case war breaks out. That same week, someone jokingly disseminated a message on the Internet regarding an emergency exercise that would be carried out to test responses for when peace breaks out. In this imaginary exercise, calming sirens would be sounded and the general public would be required to respond to the cheerful scenarios that may unfold in this new and unfamiliar situation.

In Jerusalem, the idea of preparing for peace should not be a topic of jokes. We are so preoccupied with the struggle over what the city would look like following a permanent status agreement that we are ignoring the fact that present-day Jerusalem is declining before our eyes, becoming a city in which life would be difficult even when peace finally arrives.

In east Jerusalem, Palestinian children suffer from a severely underfunded public education system. As a result, most will not find employment that can afford any kind of social mobility.

Health issues – such as development checkups – are often neglected, and health problems that should be addressed in childhood will become a future economic and social burden, even in times of peace.

Chaos in the material aspects of life is sorely evident in east Jerusalem, where things like dense construction around roads which preempt any future expansion and collapsing sewage systems are creating an irreversible reality on the ground. The poverty and neglect in east Jerusalem will not only cause hardship for the Palestinians living there but will also affect the Jews in west Jerusalem whether the city remains united or divided, because if the city remains united, the need to rectify these problems would affect the funding for the western neighborhoods; if it is divided, poverty and neglect in the east would quickly become fertile ground for crime and terror against the Jews in the west of the city.

DESPITE ALL these threats to the future of the city, too often Jerusalem’s municipal decision-making process is shaped by considerations that contradict local interests and cater to global politics. One example is Jewish construction beyond the Green Line. The construction in Ramat Shlomo in north Jerusalem and in Gilo in the south made headlines across the world. Yet, anyone who has taken part in Israeli- Palestinian negotiations on Jerusalem knows that in any reasonable scenario, these neighborhoods will remain on the Israeli side. Moreover the construction in these neighborhoods is of high importance to the Jewish sector in the city, since construction for haredim in the north and for non- Orthodox in the south decreases the need for the haredi population to move into the secular neighborhoods in southern Jerusalem.

Reducing this pressure would strengthen west Jerusalem and this in turn, would benefit the residents in the east. Whether Jerusalem is united or divided, economic and employment cooperation between the two parts of the city keeps them intertwined and interdependent.

However, as Israel refuses to differentiate between legitimizing the building in Gilo and legitimizing the settling in the heart of the Palestinian neighborhoods, the Palestinians and the rest of the world do not make this distinction either. The world hears about Jews who enter homes in the Sheikh Jarrah neighborhood after its Palestinian inhabitants are evicted. The result: worldwide political pressure to stop the construction in Gilo and Ramat Shlomo, the same construction that can contribute to the prosperity of the city.

Israel, in response, toughens its stance on Palestinian construction in Silwan. This brings only harm to all the residents of Jerusalem Almost 800,000 people live in Jerusalem, from a variety of religions, nationalities, religious outlooks and ethnic groups. When peace comes this diversity can turn into a wonderful resource for anyone who is interested in visiting or living in Jerusalem – if only we could save the city from its current decline.

For this to happen the decision-making process on the municipal level must shift to a professionalism dedicated to improving services for all the residents of the city, one that sets aside global considerations. A greater focus on these issues at the municipal level will make Jerusalem friendlier to its inhabitants. And paradoxically, focusing on its own population’s needs can help turn Jerusalem, even in the eyes of the world, from a political burden into a universal resource.

The writer is the director of the Jerusalem Intercultural Center and can be reached at hagai@jicc.org.il. This article is published in conjunction with the Common Ground News Service and forms part of a special series on Jerusalem.

This week marked the conclusion of most of the JICC’s Hebrew and Arabic language courses for 2009-2010. The Hebrew-Arabic Study Center provides languages courses in Hebrew and Arabic to promote efficacious and positive communication between Arabs and Jews in Jerusalem.

The Hebrew-Arabic Study Center programming is made possible through the partnership of the Jerusalem Foundation, and thanks to their support our courses are offered to the public at a heavily subsidized rate.

This year we held five Arabic courses (Palestinian dialect) for Hebrew speakers: two for beginners, two intermediate level groups, and one for advanced learners. Demand for Arabic language courses is high in Jerusalem; all of our courses operated at capacity this year, with 13-15 students in each course.

This demand is sparked in part by the unique approach of our programming – intensive language acquisition with an emphasis on the needs of professionals working with Arabic speakers in the city – answering an increasing demand for Arabic skills. The high quality of our two devoted teachers, Suha Kadri and Saida Rubhi, is another primary reason for courses’ success. Registration for 2010-2011 is already almost full … 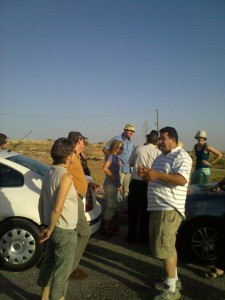 At the same time, the JICC, together with the Kesher organization, provided Hebrew instruction for Arabic speakers. Our Hebrew language course was the first of its kind specially tailored to meet the unique requirements of parents of special needs children. Today, Jerusalem-based institutions providing medical and support services to special needs children are very Hebrew-centric. These parents joined this adapted course to help ensure that they could properly communicate with their children’s Hebrew-speaking medical professionals and caregivers and access the best possible services for their families.

Year after year participants in the Speaking Art Conference for Jewish and Arab arts professionals, held every December for the past 6 years, respond that they wish to stay in touch with the friends and contacts they meet at the conference. Responding to this feedback, and in an effort to expand the impact of the Conference to continue throughout the year, on June 17, 2010, the Jerusalem Foundation and the Jerusalem Inter-Cultural Center hosted a full-day seminar for dozens of Jewish and Arab Speaking Art participants at the JICC main office on Mt. Zion. Participants from all 6 previous Speaking Art conferences were invited to attend.

In the morning some 25 Jewish and Arab participants – musicians, actors, movement professionals – took part in a photography workshop, led by Yoram Peretz, a professional photographer, instructor at Kaye College in the Negev and experienced group facilitator, especially in multi-cultural settings. Participants, working in 3 smaller groups, raised questions such as: ‘How do I view the ‘other’? How do I want the ‘other’ to view me? How does each of us translate the concept, ‘meeting / encounter’?’ 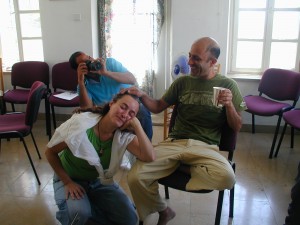 After lunch they enjoyed a tour of David’s Tomb, the room of the Last Supper, and Dormition Abbey, all of which are located near the JICC offices on Mt. Zion. For many it was the first time they were introduced to these unique sites, which are holy to Jews, Christians as well as Muslims. David’s Tomb is noted in both Jewish and Muslim tradition and has religious significance for both religions. Christian tradition notes that Jesus’ Last Supper took place in a room above David’s Tomb. In addition, the Virgin Mary is supposed to have fallen asleep on Mt. Zion for the last time; on this spot the beautiful Dormition Abbey now stands.

“This seminar came about as an effort to expand the impact of the Speaking Art Conference, and explore possibilities to strengthen it for the future,” said Nadim Sheiban, Director of the Projects Department of the Jerusalem Foundation and one of the initiators of the conference. “For example, we tried the photography workshop today and, because it is an important medium that enables dialogue between Jews and Arabs, we are considering adding that to the Conference. I know participants were enthusiastic about their experiences today; we will bear this feedback in mind when we get to the detailed planning stages.”

After the informative tour of the Mt. Zion area participants went to work. One group discussed the macro – they worked together to examine the overall vision for the conference and how to create a synergy between professional development for artists and Jewish-Arab dialogue. A second group discussed the micro – specific suggestions for new disciplines, different kinds of workshops, different moderators and guest facilitators, etc. for the upcoming Speaking Art Conference. In future meetings of the Speaking Art Steering Committee these suggestions will be discussed and implemented, if feasible. 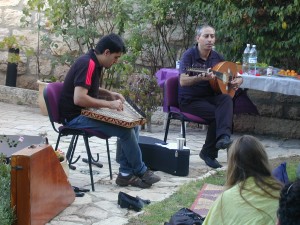 The day came to a close in the JICC’s charming garden, with a Oud and Canoun concert, led by renowned oud musician, Sameer Makhoul. As the concert progressed, participants joined in, the fruits of informal practice gatherings since the last Speaking Art Conference. Some contributed on their musical instruments (violin, guitar, darbouka drum), some in song, and some in dance. 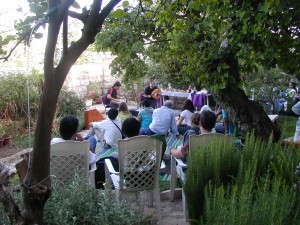 “A number of the participants [of Speaking Art] make contacts at the conference and they wish to continue to meet throughout the year,” said Hagai Agmon-Snir, Director of the Jerusalem Inter-Cultural Center. “Many indeed meet on an informal basis. I’m glad that we were able to bring together a strong core of people, most of whom have participated in the conference for several years, to get people excited and thinking about the one to come.”

This report was published at the Jerusalem Foundation website.