Jerusalem has certainly seen its share of conflict – between Israelis and Palestinians, Jews and Arabs, Ultra-Orthodox Jews and Secular Jews, and even conflicts between different Christian denominations. And sometimes, Jerusalem also leads efforts to resolve those conflicts, on many levels. Thus is the rationale behind the Prayer for Church Unity that took place on January 26, 2017 on Mount Zion. 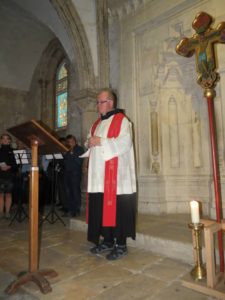 Leading the prayer for church unity

In 1964, Pope Paul VI made his first papal visit to the Middle East since the Middle Ages. In January 1964 he conducted an historic meeting with the Orthodox Patriarch of Constantinople, the first such meeting in 900 years! Since then, Christians around the world hold joint prayer services during the last week of January. In Jerusalem, this includes a special prayer, recited in the Cenacle (Room of the Last Supper), which is formally a neutral place, historically and religiously significant, and a sacred site to almost all the Christian communities in the city. 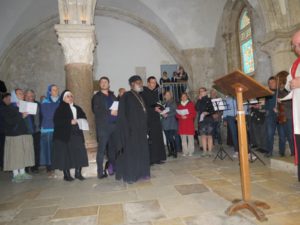 Some 200 worshipers were present

We first reported about this prayer last year. (You can read here about our experience.) This year, for the second year running the prayer for church unity again ran smoothly, thanks to the volunteers of Window to Mount Zion and their close cooperation with the David Precinct of the Israel Police. Together, clad in their bright yellow vests, Window to Mount Zion volunteers were there to advance tolerance and ensure that all 200 worshipers, members of all different denominations, were able to peacefully take part in the prayer. 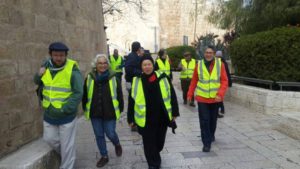 Worshipers prayed in one of the holiest places in Jerusalem, and we were proud to be part of this effort to build bridges between different groups. Congratulations to Window to Mount Zion volunteers on another job well done!