Window to Mount Zion – Ceremony for Praying for Church Unity

Window to Mount Zion – Ceremony for Praying for Church Unity 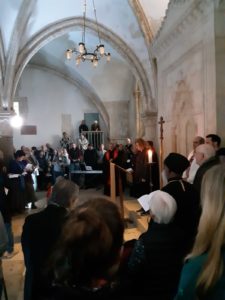 In the past, people who’ve gathered outside actually disturbed the ceremony inside. 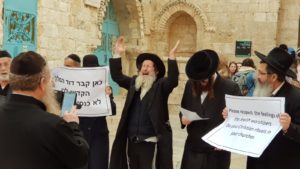 Fortunately, since the Window to Mount Zion project began, the ceremony has been held without major incident. You can read about it here and here. You can watch a few moments of the ceremony here:

There were still protesters, but it didn’t bother the ceremony. 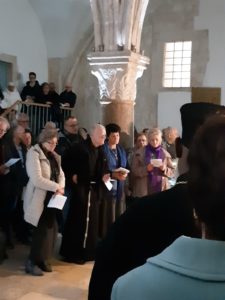 This year, in addition to thanks from the monks themselves, the Jerusalem Center for Jewish-Christian Relations (JCRC) wrote a great post, thanking the project for the change it has instilled. It was written in response to the following signs that were displayed by two protesters: 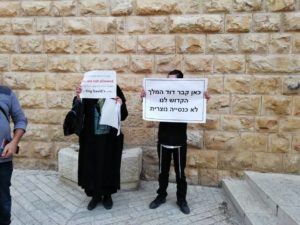 Kind David’s tomb has not been a church since 1521, when the Muslims converted it into a mosque. But it was built as a church during the Crusader period on the foundations of the Byzantine Hagia Zion church.

Despite the English sign, there is no law in Israel forbidding a Christian ceremony at David’s Tomb, but since 1948 David’s Tomb has been run by the Religious Affairs Ministry (the National Authority for the Holy Places). It is usually used as a place of Jewish worship, and allows members of different religions to visit. Once a year, the State of Israel allows the Greek Orthodox Patriarchate to visit David’s Tomb as part of the Shavuot procession on the second day of the festival.

So what caused the two people to stand with these signs last Thursday near the entrance to the Tomb of David?

On the second floor of the building, which was built as a Crusader church on Byzantine foundations, became a mosque in the 16th century and was expropriated by the State of Israel after 1948,  is the Room of the Last Supper and the Holy Spirit. It is a very important site for Christians of all denominations.
Since the site is managed by the State of Israel (the Ministry of Religious Affairs and today the Ministry of the Interior), the State of Israel has continued the status quo and enabled Christians to visit the site, a short and quiet prayer (as explained at the entrance) and several times a year they can hold short prayers on relevant days.

The State of Israel also allowed the Christians to hold a joint prayer for the unity of the churches that has existed for decades.

But in recent years, in the light of the Franciscans’ appeal to allow them to pray under certain circumstances in the Room of the Last Supper, a request that, by the way, had not yet been answered, rumors circulated about the requests of various churches regarding the Last Supper Room. Some of the rumors have also spread to the first floor and people can still be heard about how the Vatican sought to buy David’s Tomb or whether the pope made his 2014 visit conditional on receiving the keys to the tomb. But there was nothing to those rumors.

The Franciscans had already tried to return the site to their control under the British Mandate – since they had bought outright in 1333 – and failed. At the moment there is no change in the status quo regarding the prayers on the spot.

The tension generated by the project led to the creation of the Window to Mount Zion project (https://www.mountzion.org.il), which aims to create a dialogue among residents on the mount, promote an atmosphere of mutual respect between the citrus and the visitors, and deepen our knowledge and understanding of the complex.

Every year, volunteers from the window to Mount Zion arrive on these sensitive days, where Christians are permitted to hold a short prayer in the Room of the Last Supper, and help the policemen maintain a calm and dignified atmosphere. They talk to those who come to protest, explain to the surprised tourists why the site is closed for visits during the prayer, and talk to the local Christians who are happy to see that Israeli Jews care about them, the Jewish worshipers and Jerusalem.

Thanks to the many volunteers who make this project possible!