The Little Prince is Everywhere – this Time, Kiryat Hayovel

The Little Prince is Everywhere – this Time, Kiryat Hayovel

The Little Prince is at it again. This time, on Olswanger Street in Kiryat Hayovel. 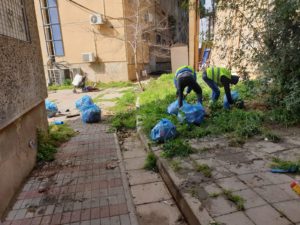 Olswanger Street, finally being cleaned up

They posted on Facebook about how much trash there was on the street, a place where thousands of people live, work and study. (In addition to residents, there’s an elementary and junior high school and six kindergartens on that street.) We developed relationships with local sanitation workers, the municipal enforcement workers (those who give fines for littering, etc.) and landscaping department. We recruited residents, created plans, met, talked, and…… nothing happened – there was not yet enough passion and responsibility at the residents’ side to be a part of the solution. Very frustrating. 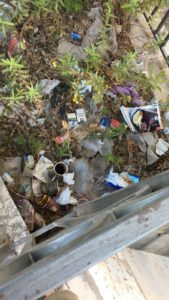 Before. This is what people had to live with.

A year went by. The Jerusalem Municipality began to implement its clean city reform, according to which the Municipality would take responsibility for cleaning 1,250 acres of private-public spaces (PPS’s – we wrote about them here). Technically, it doesn’t need to, because, technically, these spaces aren’t city property. But they are public property, and it just makes sense. We’ve said it before but it’s worth repeating – thank you to the Municipality as a whole and the different departments involved. This is a groundbreaking move, with Jerusalem being the first municipality in Israel to clean up the PPS. Hopefully, other municipalities will follow suit. 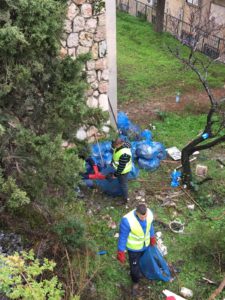 Bags upon bags of garbage

So finally, Olswanger St. is receiving its due. Last week, at the end of February 2020, sanitation crews began cleaning up the garbage that had piled up on the hillsides, on the pathways, between the buildings. Over the first week they cleaned one side of the street and the difference is huge! 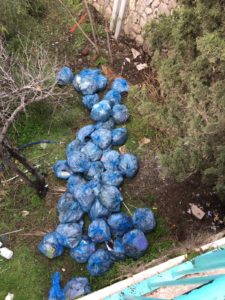 Look how many bags the garbage filled!

Let’s hope that this is a turning point for Olswanger Street, for many clean years to come. 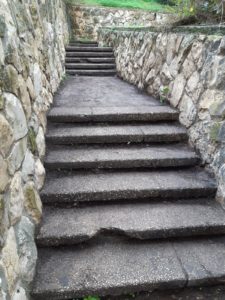 After. Hoping for a cleaner future.

Our Tal Kligman posted about this cleaning event in the Little Prince Facebook group. Here’s her post:

Many thanks to the Jerusalem Foundation and to the Rayne Foundation for their support of the Little Prince.