The Israeli Hope in Academia is one of President Reuven Rivlin’s initiatives to promote diversity and cultural competence in Israeli society. Although the president’s vision focuses on “four tribes” – four groups in Israeli society that will be prominent in formulating its future (Arabs, secular, religious-national and ultra-Orthodox Jews), but conceptually, this vision is very close to that of the JICC and its work to promote cultural competence in Israel. 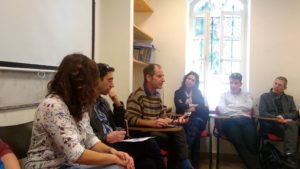 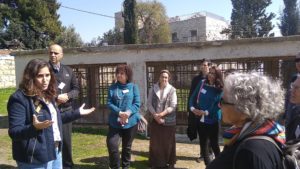 Mount Zion as an example to cultural competence and diversity

On February 26, 2020, the JICC hosted this group at its offices on Mount Zion. They began their day at the Jerusalem Intercultural Center with an introduction to the topic of cultural competence. Dr. Hagai Agmon Snir, our Director (and lecturer at the Louis & Gabi Weisfeld School of Social Work at Bar-Ilan) presented cultural competency and the diverse activities at the JICC over the past 12 years. Dr. Netzer connected the concept of cultural competence to the mission of Israeli Hope in Academia, and showed thought-provoking examples of the academia’s blindness to student diversity, barriers to students and lecturers from minority groups to advance and integrate as equals in the system, and the motivations to improve the diversity and cultural competence of academic institutions in Israel. 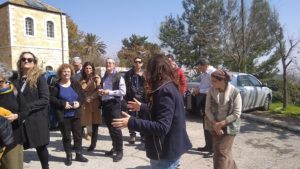 Afterward, the group toured Mount Zion, guided by Merav Horowitz, Coordinator of the Window to Mount Zion project. The tour illustrated how partnerships between people and organizations (sometimes those who do not hold official roles) succeeded in bridging disagreements and tensions in a place that is small but holds religious, political, and cultural importance to many, many groups. She described numerous examples of cooperation at the David’s Tomb complex, the Dajani family cemetery, and various events that take place on Mount Zion, sometimes routine and sometimes as surprises.

After the tour, the group met to raise questions and insights about the JICC’s work and how it can be applied to academia.

We were happy to host the Diversity group and to be part of the process of formulating and raising ideas to enhance cultural competency at Bar-Ilan University.

Dr. Rachely Ashwal, a lecturer on mediation at Bar Ilan (and who will replace Orna on her upcoming maternity leave) who is  also posted about it on her Facebook page:

Many thanks to the Jerusalem Foundation for its support of Cultural Competency since its inception.