The coronavirus – its spread, possible cases in Israel and what to do if you’ve visited certain countries or been at different sites at certain times – is at the top of Israel’s news headlines these days. 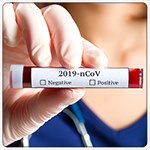 Santé Israël has been getting the word out to French speakers around Israel.

It has translated directives from the Israel Ministry of Health, and published updates since its outbreak a few months ago. This post, from January 30, was among the first giving instructions in French:

And one of the later announcements:

In addition, Santé Israël has added the latest information to its web site.

Many thanks to the Pharmadom Foundation for their continued support of Santé Israël over the years. Wishing health and safety to all!