Zion Square as a Tolerance Square in Jerusalem? A few years ago this might have seemed like a ridiculous notion to many, since this square has its history of violence, hatred and racism. Today, thanks to the Speaking in the Square initiative, other groups and supportive municipal officials, it is becoming a reality.

In mid-February the Municipality announced an architectural competition to redesign and re-brand Zion Square as a Square for Tolerance and Dialogue. The new design must include elements that advance tolerance and mutual respect. At the request of the competition organizers, Speaking in the Square, the Yerushalmim Movement, and other Zion Square activists met on Sunday, March 6 to brainstorm design ideas for the new Zion Square. 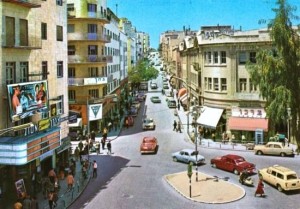 This was a very important meeting, attended by some 30 activists from a range of initiatives. Deputy Mayor Tamir Nir, as well as city council member Aaron Leibowitz also took an active part in the meeting. 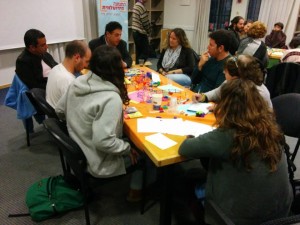 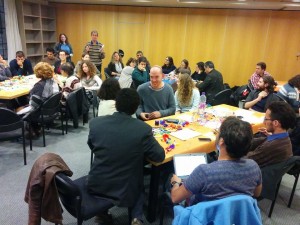 The meeting including brainstorming visual concepts to match the design theories – the most colorful part of the evening. 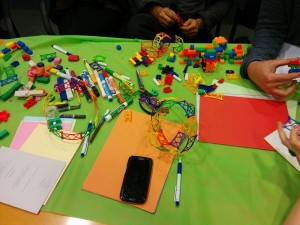 We’ll keep you posted as the design process moves forward.

Leading up to the brainstorming meeting, Ossnat Sharon, among the leaders of Speaking in the Square, was interviewed on the Hebrew blog site Ashpaton:

“I’ve been going to demonstrations since I was about 12 years old,” tells Ossnat Sharon, But being in Zion Square, participating in dialogue “was a moment of revelation for me. Something happened there that I’d never seen happen. I mean, I saw something happening in the public space that was effective. In [regular] demonstrations, on both the right and the left, people are shouting at each other, each in his own camp. In the end the police go in some direction, and that gives everyone an excuse to go home, since you can’t stand and shout all night…On that night [the first night I participated in Speaking in the Square] we did something that changed the atmosphere in the Square. We began talking.”

Many thanks to the UJA-Federation of New York and the Jerusalem Foundation for their support of our efforts to promote tolerance in the public sphere in Jerusalem.