MiniActive in East Jerusalem and beyond – meeting with the municipality hotline

MiniActive in East Jerusalem and beyond – meeting with the municipality hotline

About two weeks ago we brought together the director of the 106 municipal hotline, as well as some hotline workers, and about 20 leaders of our MiniActive groups, mostly from East Jerusalem.

In order to fully understand the importance of this meeting, we need to first explain what MiniActive is.

The process began several years ago, when we first became interested in activism in Jerusalem in the context of the different groups in the city and their ability to influence the public sphere. As we became more and more familiar with the field we got the impression that too much activist activity we saw was not effective. People go to demonstrations that people hardly know about, and return home with the feeling that they’re activists. People sign petitions that don’t lead anywhere and feel that they’re activists. People ‘like’ causes on Facebook and feel that they’re activists. In too many cases, the only result of an ‘activist’ protest is that one day the participants will be able to say that ‘we were there and we were right.’ But we are interested in activism that causes social change and too often activist action doesn’t lead to this. We tried, in our JICC meetings, to get to the root of what makes activism effective – that which causes social change – and we came across a number of insights. We even prepared a lecture on the subject. But then it became clear that there is nothing less effective than a lecture about effective activism….the message was seemingly projected, but it did not significantly influence those who are listening to the lecture.

Last year’s summer protests brought us back to the subject. And then, from conversation to conversation a new idea was born: a workshop that we call “MiniActive“. At its core is a group of a number of people (today we know that the most effective size of the group is 5. But this might change), and each one is to choose a personal challenge that he/she is passionate about and has taken responsibility to resolve. This challenge must have a decent chance of being achieved within a time frame of 4-6 weeks. This enables each participant real feedback in a reasonable amount of time to examine what works and what doesn’t work for him to achieve his specific goal. An additional condition, in order to increase the activist learning curve, is that in order to resolve the challenge, other bodies or people must be engaged (the municipality, the post office, the neighborhood grocery store, tenants’ association, etc.) A diet is undoubtedly an important challenge…but it is not appropriate for a MiniActive workshop because there is no learning that deals with influence on a social system or on other people. On the other hand, a MiniActive challenge could be to fix a broken street lamp, cause garbage to be collected, enable an area to be exterminated against fleas or rats, fix an unsafe handrail in a neighborhood school, teach a teacher that yells in school to talk more quietly, show a tenants association how to function well….etc. etc. A MiniActive challenge can be all the little – but important – things that we complain about but no one ever takes up the gauntlet to solve.

Within the framework of the workshop, the group meets every week (here too, there are variations), and each person gives an update on what is happening with his or her challenge. The fellow participants are supportive, make constructive suggestions, and mainly, laugh together. Yes, laugh. Today we know that the social side is critical here. It greatly helps if the meeting looks like a social get-together, people sitting around and shooting the breeze and talking about their problems. But we don’t get stuck in the complaining stage. In addition to creating functioning MiniActive workshops, our fantasy was that the graduates of the workshops would establish additional groups and lead them themselves, with a little bit of support and consulting. And of course, some of the graduates would do more and more MiniActive projects and even ‘graduate’ to Midi-Active and Macro-Active…

So we began, and it wasn’t as simple as it sounds. We learned that it works better when the group is ‘next door’ and / or when the group works in the same geographical area, so that beyond the learning experience, one can really see the differences that occur in that area, simply because 5 people caused them to happen. But the pace of the development of the MiniActive approach was not yet impressive.

And then Liana Nabeel from A-Tur in East Jerusalem entered into the picture and began working at the JICC. We were introduced to Liana through her participation in our Project Managers Course last year. The course included, as one of its parts, a MiniActive workshop, and Liana just completed the MiniActive challenges too early – i.e., from meeting to meeting – so that each time she needed to choose something else. We quickly brought her on board to the JICC, to the East Jerusalem Desk that Ezadeen Elsaad manages. The main challenge that we gave her was to establish MiniActive groups of women in East Jerusalem. We might not have explained it well that we meant 5-6 groups…

Within a few months, 35 – 40 groups were started throughout East Jerusalem, with 180 active women! Liana proved that beyond her activist abilities was her ability to maintain large groups of volunteers. Thus, in Wad Kadum (between Silwan and Jabbel Al-Mukaber) streets are now lit at night, garbage is being picked up more regularly and new garbage receptacles have been put in place. In parts of the Muslim Quarter of the Old City, the phone company, after decades, has fixed exposed and dangling telephone lines. (The electric company in East Jerusalem is our next challenge). In Wad Al-Joz, there were exterminations against fleas and rats, and the water company is beginning to take care of sewage and drainage problems…Just two days ago, potholes were fixed in Silwan, an initiative of the MiniActive women. A significant part of the groups were established by graduates of the first groups and are facilitated by them. And everything is done in a supportive, social atmosphere, a camaraderie of women. It sometimes angers the active male residents when they discover that their meetings, which include the community leaders, accomplish less than the energy that the women’s MiniActive groups create.

One of the important principles that we speak about is that in order to reach solutions effectively, one doesn’t necessarily need to fight the other side – people are surprised every time to discover good people who are willing to help on the ‘other’ side – in the Municipality, in the telephone company, etc. Because the Municipality’s 106 hotline (the equivalent of th American 311) is often the first step in taking care of a large part of the issues, it was important that the hotline would not see these women as annoyances, and that the women did not see the operators as the enemy who doesn’t want to solve the problems. The 106 hotline in Jerusalem is unique in Israel, having technology and work procedures that helps in municipality response to residents calls. It was important to create an encounter that would be the basis of a worthy relationship between the callers and the operators. In addition, if there were communication difficulties – there would be a way to fix them quickly.

So, as we said, on Tuesday there was a meeting of MiniActive group leaders (about 20). They also included some from west Jerusalem, but much fewer than those from East Jerusalem. It was also an opportunity to thank the American Center in Jerusalem that helped in the process of creating the MiniActive Program. It was a meeting with a slightly unorganized, energetic dynamic – partly because it was necessary to translate everything between Hebrew and Arabic and back again, partly because the activists continued to try to solve more and more problems such as broken stairs in the Muslim Quarter. (What can you do? Once an activist, always and activist…) But in the end we achieved the result we set out to accomplish – enabling the activists and the operators to get to know one another and paving the way for an even more effective ability to stimulate change. 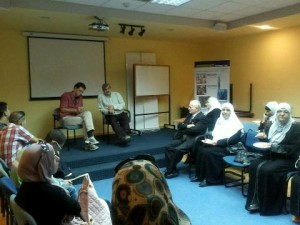 In the days following the meeting, we noticed a significant change in the dynamics with the 106 hotline. If there were additional hiccups in communicating with the hotline they were solved quickly. The energy of the women in the groups and the effective activism they demonstrate In the past few days are creating solutions to many issues in their neighborhoods.